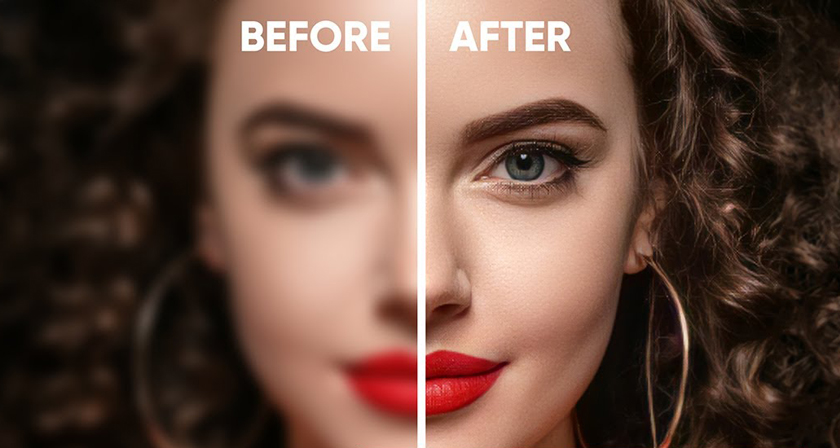 If you want to learn how to clear a blurry picture quickly and easily, you’ll need to master a photo application that can do it for you. The problem with a blurry image is that there is no way to fix it unless you have the appropriate program.

Don’t be concerned if you have some blurry photos on your phone or camera that could be greatly improved by removing a bit of blur. We’ll show you how to make a blurry picture clear.

There are dozens of applications that can remove the blur in seconds or less, and they all work in essentially the same way. Each application will have a unique sharpness tool, which is what you’ll need to remove blur from an otherwise perfect photograph.

The only difference will be the sharpening tool’s quality. Continue reading to see how each application compares in terms of how to clear a blurry image.

The Photo Editor Pro app is free to use but can be upgraded for a small fee. It has a few more tools than just the ability to unblur a picture. You can sharpen, tint, and change the hues of your images as well as edit and play with them.

Quality-wise, it’s actually quite good for a free application. If you want it to be even better, the pro version isn’t too pricey.

In addition, Photo Editor Pro includes a dedicated sharpening tool. If you don’t mind advertisements, you can use this for free, and it’s simple enough to use that you can download the app, fix a photo, and post it online in under a minute.

Pixlr is a completely free app that is available for both iOS and Android. Surprisingly, for a free program, it doesn’t even have that many advertisements.

The app is nicely presented, the editing tools are organized so that you can easily use them, and it has some great creative tools so that you can draw on your picture, add some fun text, or experiment with filters.

Pixlr, however, does not stop there. It also allows you to add borders, change the appearance of your image, and sharpen a blurry photograph. The sharpening tool is excellent, sharpening much better than some other free software without distorting the image even slightly.

Pixlr is a good option if you need something to be extremely sharp.

Photoshop Express is yet another fantastic editing tool from Adobe, with its desktop version being one of the most powerful photo editing tools on the market right now. While the desktop version can be intimidating for those who are new to editing, the mobile version is actually quite user-friendly. It’s excellent for unblurring a photograph with a single tool.

Of course, Photoshop Express will cost you some money, but it will be well worth it in the end because you will have more editing tools to do more than just make a picture clear. And, in terms of sharpening tools, it is arguably the most effective. The application makes use of a magic wand to improve the sharpness of an image by simply tapping your finger on the screen.

Sharpen Image is a fantastic app with a single purpose. Its purpose is to sharpen your images. It is completely free and can be found on the Google Play store. It’s also extremely simple and riddled with obnoxious advertisements. However, if you just want something to smooth out your photos quickly, this could be the app for you.

Unfortunately, when compared to some paid software, it does not do a good job of sharpening images. It’s honestly hit-or-miss, either fixing a blurred image or completely ruining it.

The last thing you want is for the image to be too clear because the app is too grainy. Still, it doesn’t hurt to download and try it for free.

Afterlight works well on both iOS and Android, and it is available as a free service or as a pro version that requires a monthly payment. Nonetheless, it is a comprehensive program that edits photos with presets. There is a learning curve if you are unfamiliar with photo editing. There are numerous settings that you must become acquainted with.

But it is this feature that distinguishes Afterlight as a fully functional app capable of creating double exposures, allowing you to create your own filters, and, of course, unblurring your photos. However, it is intended for those who want to take their time and be creative with their photographs, rather than simply sharpening them.

The Enhance Photo Quality app does exactly what it says it will do. This application is available on the Google Play store, and it is a very simple tool that allows you to effectively sharpen your image and, as the title implies, improve the photo quality.

This is one of the most user-friendly applications. If all you want to do is make a blurry photo less blurry, open the app, make a minor adjustment, and be pleased with the results.

The only issue with this app is that if you sharpen it too much, you may ruin the image and make it look even worse. And, unfortunately, because it is free from the Play store, it is littered with banner advertisements.

The Focos App is only available for iOS. It actually simulates the experience of shooting photographs as if you were using a manual camera, which means you should be familiar with camera settings such as aperture and exposure.

You can make the same adjustments with Focos App that you can with more popular applications like Lightroom, but they don’t work quite as well. After all, this is a free app unless you want to pay for a pro membership, so the more nuanced effects aren’t as effective.

Still, Focos can unblur all of your iPhone’s photos for free. It’s also great for adjusting photos when your focus isn’t quite right. And unblurring is as simple as adjusting the aperture, focus, and contrast.

One of the reasons Lightroom is so great is that if you have a subscription, you can easily get the software for both your computer and your mobile device. You can switch between the two versions and unblur images as you see fit. It’s the masking tool you’ll want to use with Lightroom, and it even lets you select which parts of the image to make clear.

Yes, Adobe Lightroom is more complex than most other apps, but it simply works better. If you only want to unblur photos, you’ll probably want something a little simpler.

VSCO is one of the most popular and well-liked applications for the iOS operating system. It’s great because you can use it to edit photos from your phone as well as those from your professional camera. It combines the best of both worlds. It even has a plethora of filters that you can use on your images.

Now comes the sharpening tool’s turn. It can be a very effective way to reduce blur in almost any photograph while also making it appear sharper.

As you can see, there are numerous methods for sharpening a photograph. So, when it comes to how to clear a blurry image, all of the applications work pretty much the same way. Almost every app will include a special sharpening tool that allows you to clear up the image by simply swiping a dial from one side to the other and stopping when the image appears clear enough.

However, some applications go a step further. Some of the more refined applications, for example, will let you clarify, sharpen, adjust the contrast, play with the exposure, and even adjust the fade. Everything is dependent on how complicated you want things to be.

You can use a free app to sharpen a photo, or you can use a more professional app that not only sharpens a photo but also brings it to life and increases the details.