In order to shoot better video clips, you’d better get a gimbal stabilizer. We have tested and reviewed the latest gimbals, and below are the Best Budget Gimbals.

There are several features that can help to make the video look a lot more polished as a filmmaker. one of those things is to get photos that are stable. There are about three million ways the videos can be stabilized. On a stack of books, you can balance your camera, but I suggest this only if you’re a total novice and all you have is a camera and nothing else.

There’s a tripod or monopod you can use. A dolly or crane or some other large, Hollywood-grade piece of equipment may be used. There are all possible solutions, but not really if you’re a smaller filmmaker who chooses to be a pro. 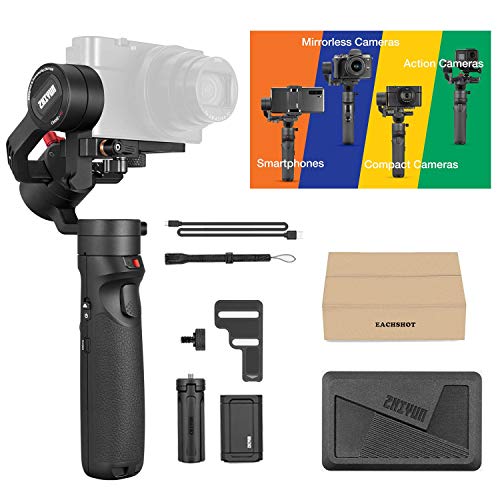 The Zhiyun-Tech CRANE-M2 3-Axis Handheld Gimbal Stabilizer is designed for compact cameras, cellphones, and action cams with a maximum weight of 1.58 lb. It is more compact and weighs less than its predecessor. (An adapter for mounting that is sold separately is necessary in order to attach action cams.) Because of its little size, the camera can be maneuvered with greater ease and for extended periods of time. It is also much simpler to pack up and bring with you, whether you are going somewhere locally or traveling far away. With this caveat in mind, the CRANE-M2 comes equipped with all of the usual capabilities that have made gimbals such a game-changing addition to the world of camera supports.

The CRANE-M2 provides a pan rotation of 360 degrees, a tilt rotation of 310 degrees, and a roll rotation of 324 degrees across all six modes of operation, including the POV and Vortex modes. It has an internal battery that is rechargeable via a micro-USB cable that is also provided, and that battery can power it for around seven hours. The gimbal is able to synchronize with a Wi-Fi-enabled camera that enables remote zoom, shutter, and video start/stop control because it comes equipped with its own Wi-Fi connectivity. On the gimbal are a zoom rocker and a number of additional controls that can be used to operate these tasks. In addition, the camera has built-in Bluetooth, and it can sync up with the ZY Play mobile app, which is available for free download on iOS and Android devices. This app adds extra features to the camera. The application allows for remote control of a variety of the gimbal’s operations and also includes filmmaking capabilities such as the ability to create time-lapse, panorama, and slow-motion video.

On the gimbal is an OLED display that provides confirmation of the selected mode of operation, the current battery level, the Bluetooth and Wi-Fi connection status, and other features. The CRANE-M2 provides a rapid-release camera mounting mechanism that enables you to safely mount or detach your camera with the press of a single lock button. You are able to balance the camera and secure the balance position for the camera that you are using with the use of scale marks and memory locks. In addition, a hand strap and a miniature tripod are included with the purchase of the gimbal. You may attach the tiny tripod to the bottom of the gimbal so that it functions as a tripod or a stand. However, the mini tripod can also be used as an extension so that you have an even greater grasp on the gimbal, which will give you even more control over the camera and the gimbal. 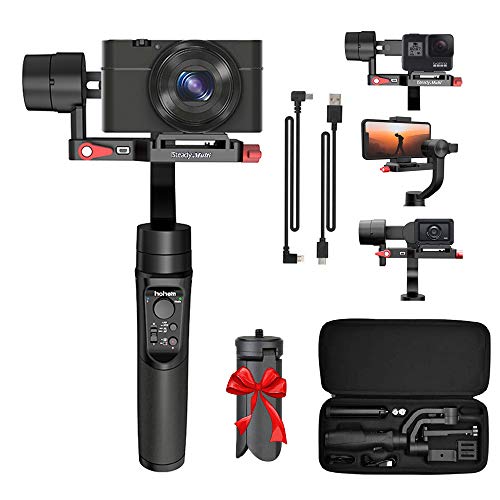 With the help of Hohem’s iSteady Multi 3-Axis Handheld Stabilizer Gimbal, you’ll be able to do innovative camera motions, as well as stabilize your action photos. The iSteady Multi was developed to give content creators who record their videos with their action camera or mobile phone access to functionalities that are reminiscent of a cinematic experience.

Users of Android and iOS devices are able to operate gimbal and smartphone camera capabilities such as focus, zoom, and still photo settings when the control panel is used in conjunction with the free Hohem Gimbal app, which can be downloaded from the respective app stores. On certain Sony cameras, such as the RX100, the Multi cable that is included gives you control over fundamental camera functions such as starting and stopping the camera, focusing, zooming, and the shutter.

The iSteady controls eliminate the requirement that you touch the screen of your action camera or phone, which helps to lessen the amount of accidental jostling that occurs when recording. Additionally, it can support cameras or phones that weigh up to 14.1 ounces. You are able to execute controlled rolls and tilts of up to 320 degrees, as well as pans of 360 degrees, thanks to the 3-axis gimbal. It is compatible with a variety of modes, such as the all-follow mode, the sport mode, the time-lapse mode, the motion-lapse mode, the all-locked mode, and even the “Inception” mode, which enables you to roll and pan 600 degrees while still tracking your subject. 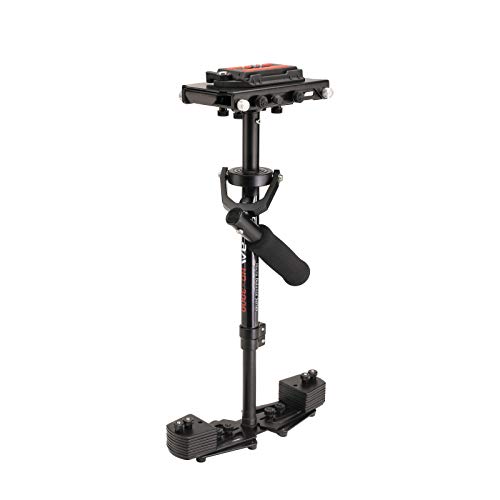 With the HD-3000 Video Stabilizer from FLYCAM, you can use a wide range of cameras weighing up to 8 lb to record footage that is smooth and steady. This stabilizer is equipped with a three-axis gimbal and a foam handgrip, making it simple to record handheld footage that appears to have been shot by a professional. Additionally, it can be readily used for panning, tilting, booming, or running shots. The stabilizer is composed of aluminum, which is a lightweight metal, and it weighs a mere 2.6 pounds.

The HD-3000 has a tool-free telescopic center post that extends from 15.7 to 23.6 inches and a dynamic camera balance platform that allows the camera to be balanced on its X and Y axes. Additionally, the HD-3000 can balance camera rigs that weigh up to 8 pounds. The included quick-release plate installs on the top plate and has 1/4″-20 and 3/8″-16 screws to mount a variety of cameras.

It comes with sixteen counterweights that can be stacked onto the adjustable base to ensure that the weight distribution is just right. A table clamp serves both as a mounting point for the gimbal so that it may be balanced and as a place to store the completed and balanced gimbal when it is not in use. 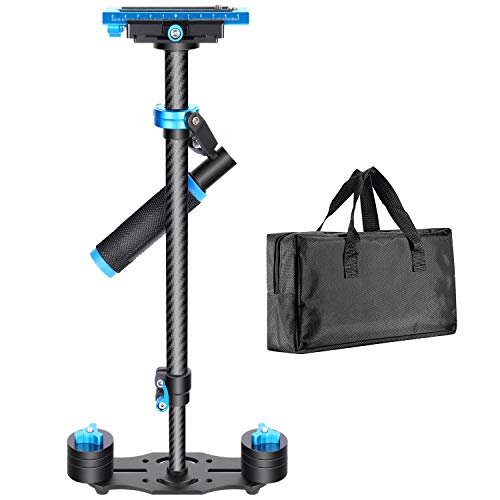 The dark number 24 “Neewer’s Camera Stabilizer with Quick Release Plate is a manually operated stabilizer system that features an extensible center post made of carbon fiber. This stabilizer has a payload capacity of 6.6 pounds, and it can horizontally stabilize your camera while also reducing vibration. It also has a 15 to 24 “height that can be adjusted. The feature of an extending center post ensures that the weight ratio is accurate while also reducing the total counterweight that is necessary.

The included quick-release sliding plate has both 1/4″-20 and 3/8”-16 screws and can be used to adjust your camera’s balance. The non-slip rubber handle of the stabilizer provides a secure grip and is designed to be used in conjunction with a vest rig. It comes with a carrying case that makes it easy to transport and store the counterweights, as well as four 3.5-ounce counterweights and two 7-ounce counterweights. 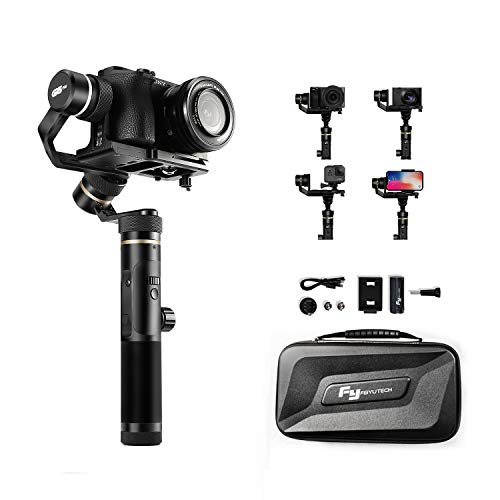 Compact cameras and lenses are ideal candidates for the Feiyu G6 Plus Handheld Gimbal Stabilizer, which is designed for use with combinations such as the Sony a6500 and the Sony 16-50mm E-mount lens. Utilizing the gimbal controls to do direct record start/stop triggering, zooming, and focussing with certain cameras is one of the primary capabilities of the G6 Plus. This is one of the device’s most notable features. The list of cameras can be found in the Features section which can be seen below.

You may pan, tilt, and roll for up to 12 hours on a single charge of the G6 Plus’s battery, and the resulting film will have a smooth, steady, and cinematic appearance. On top of that, having the capability to record, zoom, and focus without having to touch the camera adds to the stability of your shot, provides a more fluid workflow, and also prevents the need to rebalance the gimbal. This is because pressing the record button or another control on the camera typically throws a gimbal off balance.

The first configuration for the direct record, zoom, and focus control is accomplished by synchronizing the camera and gimbal through the Feiyu ON app for iOS and Android, which is offered to you as a free download. This app is compatible with both the iPhone and the iPad. Additionally, the app enables you to make many tweaks to the settings and provides a variety of other remote control options. Downloading the free Feiyu Vicool app is possible if you plan to use an optional adapter to put a smartphone on the gimbal. This app offers its own set of capabilities and functionalities that are tailored specifically for smartphones.

The G6 Plus is compatible with cameras that are no taller than 2.75 inches (a larger camera may not be able to clear the gimbal) and no heavier than 1.75 pounds. Additionally, it comes with a mounting adaptor for action cameras, allowing you to attach your GoPro or any other type of action cam. Because it is also splash-proof, the G6 Plus gives you the flexibility to use it in some settings where it would normally be impossible to get the photo you want, such as in the rain. Please be aware that it is not waterproof and should not be used in salt water or submerged in water of any other kind. Additionally, the water resistance decreases when the device is being charged.