By purchasing the most effective flash diffuser for your camera, you will be able to eliminate the harsh shadows and glaringly brilliant portions of your photographs. Diffusers for flash come in a variety of sizes and forms, and each one has its own unique level of diffusion. Light diffusers that are larger will spread the light further, which will result in a softer overall level of illumination.

When it comes to tinkering with the amount of illumination provided by the flash attached to your external camera, you have a number of options available to choose from. You should be able to determine the most likely choice based on both what you hope to accomplish and the topic of the shot you are taking.

The following is an examination of the numerous varieties of flash diffusers. The positives and negatives of each and some comparisons will assist you in selecting the best flash diffuser for your needs. 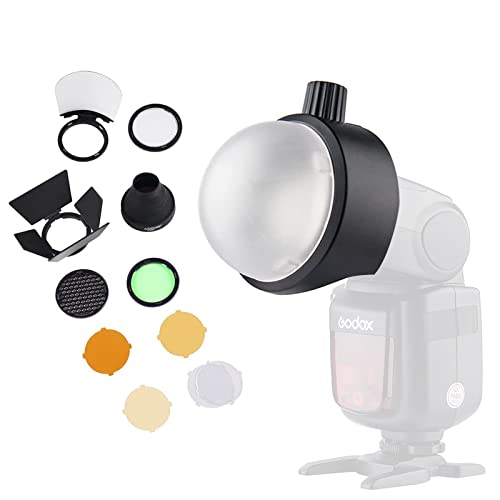 Amazon
The Godox Flash Kit is a solution that won’t break the bank if you’re looking for accessories to help boost the exposure of your subject. We like it because, for the same price as approximately a third of the price of other kits, such as the Magmod professional flash kit, you get more features than those other kits offer.

Although the majority of the kit is designed around the Godox AKR1 and the S-R1, it does come with a magnetic adaptor that may be used with flashes that have a rectangular head. It won’t take you long to figure out how to attach the adaptor to your flash. In addition to that, it comes with a robust knob that firmly connects to your flash in order to prevent it from becoming detached.

Even while the adapter does not add a significant amount of weight to your flash, it may mean that you cannot keep your kit in the same amount of space as before. After attaching the adaptor, it’s possible that you won’t be able to fit two flashes in the space that was previously available to you. 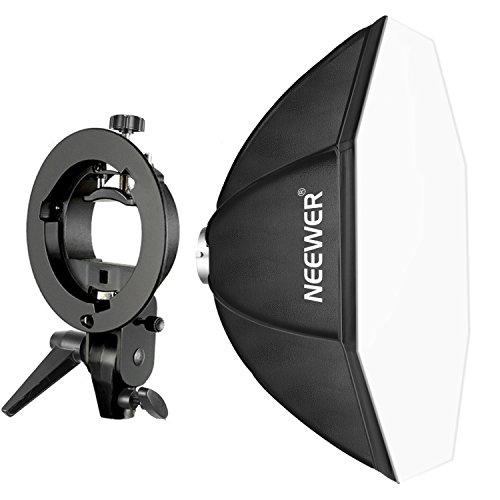 Amazon
The Neewer 32×32 Inches Softbox is an outstanding alternative that, thanks to its portable size, you can easily bring with you wherever you go without having to make any special accommodations.

Octagonal measuring 32 by 32 inches (80 by 80 centimeters) brand new…
Because it is a softbox, the light will be directed at your subject rather than being diffused in all directions, as is the case with an umbrella or multi-directional diffuser. This indicates that you will be able to get more light on your subject, even if they are a little bit more away from your Softbox than they would normally be.

For those who are just starting out, putting together the Neewer 24″ octagon can be quite a difficult task. This unit makes the process easier, and it takes less time, but it is not as convenient as the compact MagMod diffusers that we are reviewing.

This device, like the Neewer 26-inch, comes with two diffusers already installed. These two help to diffuse the light beautifully, resulting in an exposure that is more fluid.

In spite of the fact that they cast a calm light on the topic at hand, these lights do not scatter nearly as much light over the room as an umbrella would. When compared to the Neewer 72 Inch Umbrella, this product is preferable for photographers who want photographs with darker backgrounds.

Using the clamp that is attached to your flash, you can either install it horizontally or vertically. In addition to being simple to operate, it securely fastens your Speedlight in place. In addition to that, it is compatible with a diverse selection of flash heads. Multiple camera manufacturers, including Sony, Nikon, Canon, Panasonic, Pentax, and Neewer, are supported the device. 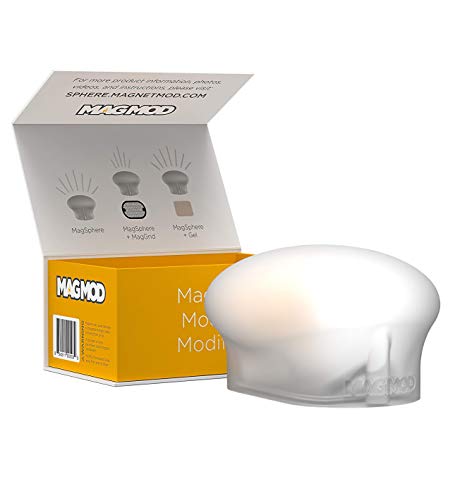 Amazon
An omnidirectional flash diffuser, the MagMod MagSphere can be found here. When your flash goes off, it emits light in a soft, diffused manner that spreads in all directions, creating a bouncing effect from all directions. Your subject will appear to be illuminated by a more prominent light source as a result of the light wrapping around it.

The MagMod MagSphere is the World’s Most Stunning, Adaptable, and…
The extraordinary way in which it fills in the spaces that regular light is unable to reach is one of the reasons why we find its performance to be satisfactory in rooms ranging in size from very tiny to medium. It provides a great direction for shadows to fall in curved areas while at the same time permitting light to enter from any and all directions.

When you bounce your flash toward the ceiling in a large room, you could find that the flash is less effective than usual. There is a tendency for the light to lose a significant amount of its power as it climbs upwards before it reaches the victim. When it is bounced off of a wall located at a great distance, the same rule applies.

To obtain an exposure that is satisfactory, it is important to focus the camera straight at the subject you are photographing when working in large places or during events. The flash creates an effect similar to a spotlight, which causes the edges of the produced photos to have a smooth transition.

You can use it in conjunction with a grid to give your light more definition while also improving the appearance of the spotlight. Because this combination produces a more condensed effect, it has gained a lot of popularity in recent years.

Because it can also function as a tiny flash diffuser, it is very easy to bring along on trips. 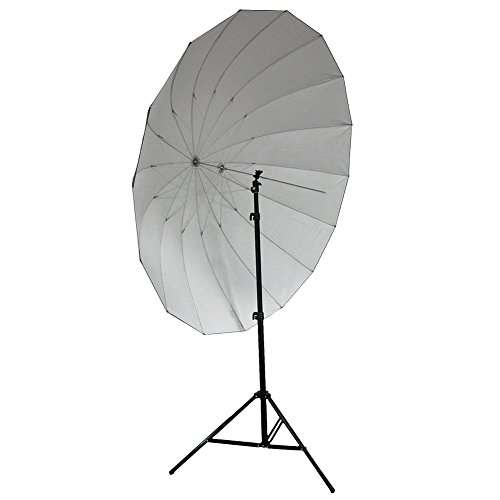 $62.99
$59.99
Save: 3
Amazon
The Neewer 72″ Diameter Umbrella Diffuser gives you a number of benefits while overcoming some difficulties that you might experience with our other recommendations.

We admire its immense size. It is the largest diffuser on our list, measuring 72 inches, which provides you with an exceptionally huge surface area for the light to reflect off of. It is interesting to note that despite the substantial difference in size, the price of the Neewer 43″ umbrella does not need to be increased by very much in order to accommodate it.

Because it is shaped like a parabolic umbrella, the light is directed toward the topic rather than being diffused. As a result, it is capable of producing a greater amount of output at greater distances than a conventional umbrella. Its light wraps around your subject wonderfully, giving you a stunningly gorgeous touch to the shadows while still avoiding being overly harsh.

This flash diffuser has a more straightforward assembly process in comparison to the Neewer 26 Inch Softbox. It is necessary to just push it out of the way and then install the diffuser. If you are not experienced with other types of softboxes, using the Neewer softbox with a 26-inch diameter could be difficult for you. Additionally, you are required to pull up the metallic pieces.

The device comes equipped with a standard shaft that can be used to mount it to a stand of some kind. When taking pictures of groups, you may position it any way you choose, and it will provide a generous amount of soft light.

Consider that this flash diffuser might not be the ideal choice if your subject is moving if you undertake photography for a variety of subjects in addition to real estate. 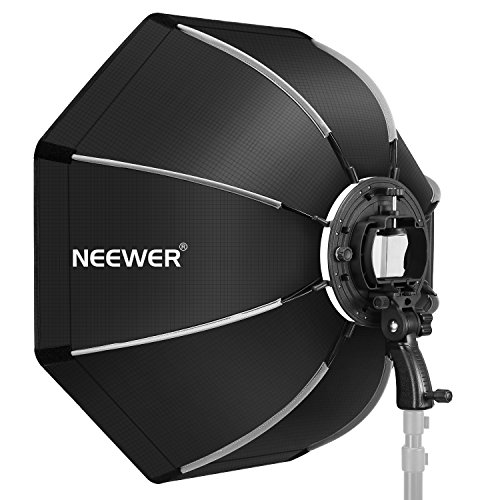 Amazon
Despite its size, the octagonal Neewer 26′ Softbox is nevertheless quite compact, making it an excellent choice for persons who are constantly on the move.

Two diffusers are included with the purchase of a Neewer 26-Inch Softbox. You also receive a size that is significantly larger than alternatives such as the MagMod flash diffuser. By doing so, you can obtain a higher level of softness, which will result in the light being distributed more equally across your subjects.

In spite of the fact that it only emits light in one direction, its dimensions are far more extensive than those of the Magbounce located below it. This enables you to position it further away while still being able to effectively diffuse the light around your complete subject, which means you can do it at a closer distance.

The most wonderful thing about this flash diffuser is that it allows you to get a light that is both significantly broader and much softer for only a slightly higher price. This device is a good option to go with if you’re looking for a better flash diffuser to use when shooting in daytime conditions.

The assembly process is not too difficult to understand. However, despite its compactness, it still requires a fair amount of time to set up, so it is not really the greatest choice for circumstances in which you are required to be continuously on the move.

In spite of this, it is compatible with the vast majority of flashes, and its secure grip will prevent your Speedlight from falling off. Even if it is not the smallest unit in question, when folded up it takes up very little space. Because it comes with its own carrying case, you may also transport it independently of the rest of your photographic equipment. 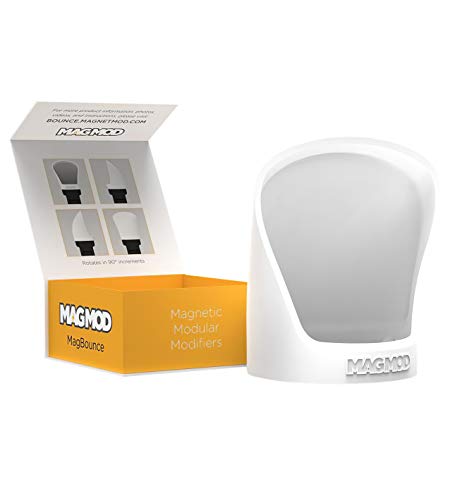 Amazon
The MagMod Magbounce is yet another excellent choice to make, and despite its dissimilar appearance to the MagMod MagSphere, it still delivers outstanding performance. Both are priced similarly to one another, but which of these two should you select given their similarities? the MagMod MagSphere.

This light source, in contrast to the MagMod MagSphere, emits light in a specific direction rather than in all directions simultaneously. A good, broad, and effective spread of light is produced by the MagMod Magbounce, and its operation is essentially identical to that of the Neewer 43″ Softbox.

Because it only emits light in one direction, it is ideally suited for use inside, particularly in spaces with dark ceilings and walls. Because of the slightly curved shape of the cloth, there is no need for you to worry about bouncing like the Magsphere. It will bounce immediately off of the surface.

The Magbounce is an excellent choice whenever you need a flash diffuser that allows you to set it on the side and utilize it to generate a substantial exposure impact in an effective manner. You’ll get a tremendously wide range of softened lighting with the help of this accessory, which functions virtually identically to a compact softbox or an umbrella.

In contrast to the spotlight effect that the Magsphere provides, when you photograph with it, you get to light up the subject as well as highlight some of the surrounding environment.

When you need to put a lot of light behind your subject, you can also use it as a flash diffuser because it is fantastic. When the flash is turned up to its maximum setting, the Magbounce can unleash a tremendous amount of light, which helps to blur out scenes with a lot going on in the background. This element is ideal for drawing attention to certain details.