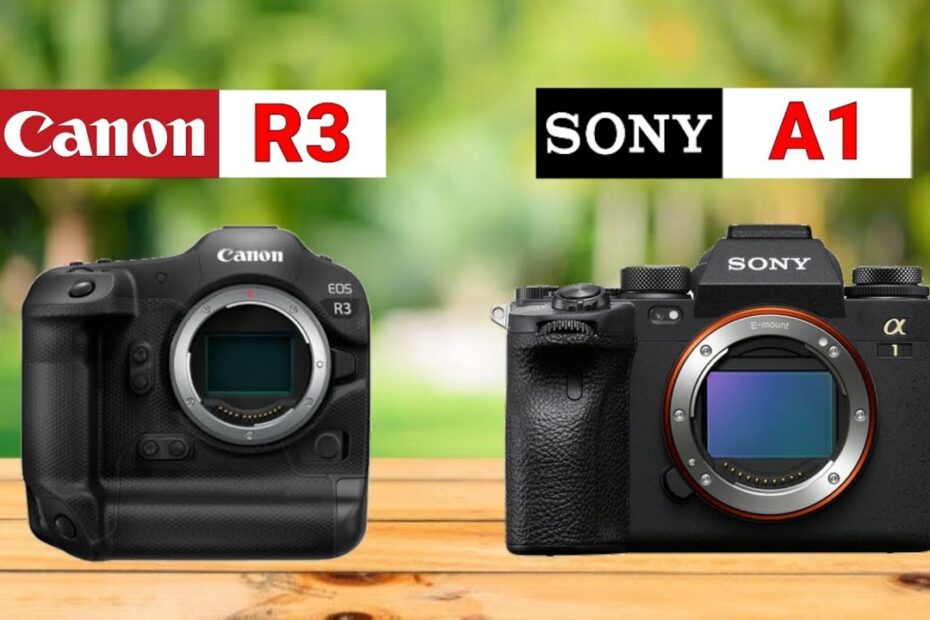 Sony has recently had a lot of success with the Alpha 1 camera, which has created a lot of attention among professional users and serious enthusiasts alike despite its £$6500 price tag.

Canon has now retaliated with the unveiling of the EOS R3, on paper their most stunning camera to date, and definitely a direct competitor to the Sony A1.

When it comes to fundamental specifications and features, the Sony A1 and the Canon EOS R3 have a lot in common, so which one should you choose?

This detailed Canon EOS R3 vs Sony A1 head-to-head comparison will help you decide between these two premium full-frame mirrorless cameras.

The Sony A1 is equipped with a 50 megapixel Stacked, Back-Side Illuminated (BSI) CMOS sensor.

The EOS R3 also incorporates a stacked BSI sensor, like the Sony A1, although it has a much lower resolution of 24 megapixels.

Canon has been quick to stress out that the new sensor in the EOS R3 was developed entirely by Canon, not Sony.

The Sony Alpha 1 has an eye-catching 8K video option, making it one of just two digital interchangeable lens cameras with this capability at the moment, the other being the Canon EOS R5.

Because of the 24 megapixel sensor it employs, the Canon EOS R3 “only” allows 6K/60p recording, in addition to 4K video at up to 120p.

We also hope that the larger body and negative feedback received by Canon about the R5 mean that the new EOS R3 does not suffer from overheating in the same manner that the R5 did, making it more likely to match the superb performance of the Sony A1.

That appears to be the case since Canon claims that the R3 can record up to six hours of standard footage or 1.5 hours at high 119.88/100p frame rates.

The new Canon EOS R3 features the most advanced form of Dual Pixel CMOS AF that the firm has ever developed, as well as a completely new vehicle tracking mode that allows you to expertly follow motorbikes, open cockpit Formula cars, GT and rally vehicles, and even the driver’s helmet!

In an attempt to outdo Sony, the Canon EOS R3 allows you to pick and move the AF point simply by looking through the electronic viewfinder, something that even the mighty Alpha 1 cannot do.

It remains to be seen how effective this intriguing new mode will be in practice, but it might give the R3 a significant advantage over the A1 when it comes to swiftly focus without having to touch the camera controls.

With its electronic shutter, the Sony A1 features a class-leading 30fps burst shooting mode for 165 JPEG frames or 155 compressed RAW photos.

That is, until today when the Canon EOS R3 improves on the EOS R5’s 20fps mode by offering 30fps shooting with the electronic shutter, full AF/AE tracking, and minimum picture distortion for 540 JPEG or 150 RAW shots.

The Sony A1 generally follows the tried and true design of seemingly practically every prior Sony Alpha camera – if it ain’t busted, don’t fix it seems to be the newest Alpha camera’s credo – with the A1 seeming like a more polished mix between the A9 and A7S series bodies.

The Canon EOS R3 takes a different approach, with a similar integrated grip and replicated vertical controls as the EOS-1D series cameras have traditionally had.

This means that the R3 will be significantly larger and heavier than the A1 out of the box, though adding a battery handle to the top Sony camera may significantly reduce the size and weight discrepancies.

Both cameras are completely weather-sealed, as you’d expect from such high-end devices.

The new Sony A1 boasts a 5-axis optical in-body image stabilization system, however, it only delivers up to 5.5 stops of compensation, which is adequate but not class-leading.

That honor goes to the Canon R5, which boasts a fantastic stabilization mechanism. It has a 5-axis in-body image stabilization (IBIS) system that can deliver up to 8-stops of IS when used with compatible RF-mount lenses.

The new R3 features the same IBIS system as the R5 – its 5-axis In-Body Image Stabilizer can combine with the optical Image Stabilizer in certain RF lenses to provide industry-leading performance worth up to 8 stops, providing Canon an advantage over the Alpha 1.

The Sony A1 features a 9.44M-dot OLED Quad-XGA electronic viewfinder with 0.90x magnification and a refresh rate of up to 240 fps, ensuring no black-out even when filming at 30fps.

The Canon EOS R3 sports a 5.76M-dot OLED electronic viewfinder with 0.76x magnification and a fast 120fps refresh rate, which is the same as in the EOS R5.

The Sony A1 features a 3.0-inch LCD screen with 1.44 million dots of resolution that can be adjusted up and down by 107 degrees.

Surprisingly for such a high-end camera, the EOS R3 boasts a more adjustable vari-angle touch screen that, unlike the fixed screen on the EOS-1D X III DSLR camera, allows for greater flexibility of shooting angles thanks to its ability to tilt and rotate into a variety of positions.

It also has a greater resolution than the Alpha 1’s screen, with 4.1 million dots to be exact.

The Alpha 1 includes twin memory card slots, as one would expect from a professional camera. They can both be utilized with SD UHS-I/II compliant memory cards or CFexpress Type A cards.

The Canon EOS R3 only features one UHS-II SD card slot and one ultra-high-speed CFexpress slot, unlike the EOS-1D X Mark III, which has two CFexpress slots.

The Sony A1 employs the same well-known NP-FZ100 battery used in all modern Alpha cameras, which delivers up to 430 photos while using the viewfinder and around 530 shots when using the LCD panel.

The Sony Alpha 1 is now the best all-around, do-it-all camera on the market, combining all of Sony’s cutting-edge stills and video technology into a single body and outperforming Canon and Nikon.

Canon has already responded to the challenge by releasing the R3, which is definitely their retort to the Alpha 1. Now that they’ve revealed all of the critical specifications, it’s clear that the EOS R3 will be a very serious competitor for the A1 when it releases later this year in November.