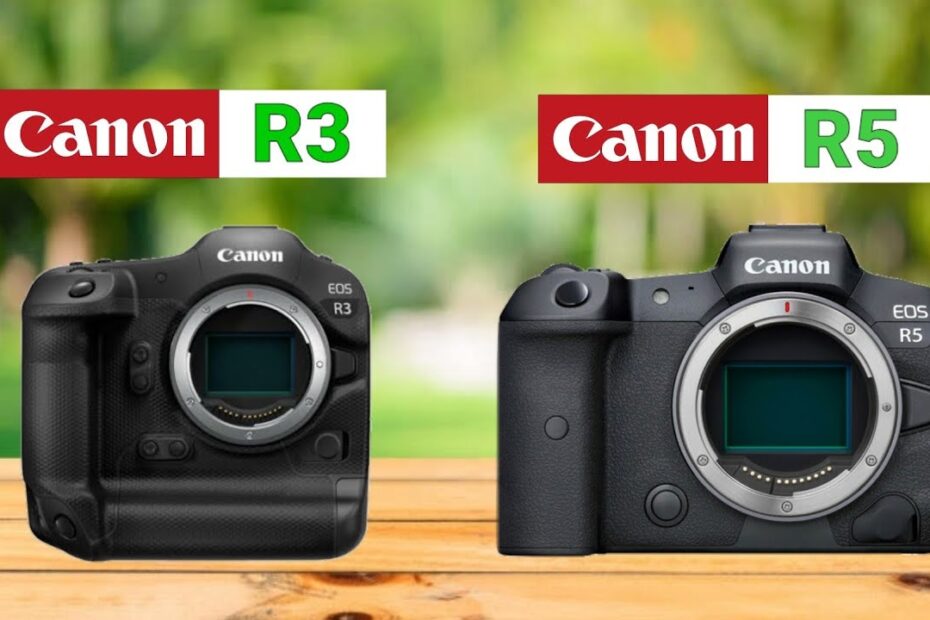 Since its release in early 2020, the EOS R5 has proven to be a very successful camera for Canon, leading the way in full-frame camera sales in Japan and helping to keep Canon profitable during a difficult year.

Canon has lacked a similarly specced flagship model since the highly anticipated release of the Sony Alpha 1 and the recent announcement of the Nikon Z9 – until now, that is.

So, what distinguishes the new EOS R3 from the R5, and which of these 35mm full-frame sensor mirrorless cameras is best for you?

We’ve put up this detailed Canon R3 vs Canon R5 head-to-head comparison to help you decide between the two.

The Canon R5 contains a 45-megapixel sensor, but the EOS R3 has a much lower resolution of 24 megapixels.

The type of sensor used by each camera provides the EOS R3 a potentially significant advantage. The R5 uses a normal CMOS sensor, but the R3 is the first EOS camera to use a Stacked, Back-Side Illuminated (BSI) CMOS sensor (similar to the Sony Alpha 1), which could result in improved low-light performance at comparable ISO rates.

Canon is also quick to stress out that the new sensor in the R3 was created by Canon, not Sony, the industry leader in sensors.

The Canon R3 employs the same Digic X image processor as the R5, R6, and EOS-1D X Mark III cameras, which, when combined with the new stacked BSI sensor, enables the R3 to shoot at even quicker rates for both stills and video.

The Canon R5 features a Dual Pixel CMOS AF system with 5,940 unique phase-detection points that span the frame up to 100 percent vertically and horizontally utilizing the Auto AF area option.

The R3 also boasts a whole new vehicle tracking mode that allows you to precisely monitor motorbikes, open cockpit Formula cars, GT and rally vehicles, and even prioritize the vehicle or the driver’s helmet!

Even more thrilling, the Canon R3 allows you to select and move the AF point with your eye using the electronic viewfinder!

Except for three Canon film SLR cameras, the EOS R3, and no other camera in history, you can focus on a subject just by gazing at it via the viewfinder.

The EOS 3, 5, and 50 all had an eye-controlled autofocus technology that allowed you to calibrate the camera to your eye and then choose an AF point just by gazing at it. The EOS 5 and 50 only had 3 AF points, thus it worked quite consistently, however, the EOS 3 had 45 AF points, making the system more hit-or-miss.

Now, a few decades later, the new Canon EOS R3 is seeking to pull off the same trick, but in a more sophisticated, more precise manner appropriate for the most demanding professional users, describing it as “an AF control system ready for the twenty-first century.”

According to Canon, the R3 ushers in “a new age of high-speed performance for pros.”

If you prefer even quicker burst shooting, the Canon R3 goes a step further by shooting at 30fps with the electronic shutter, full AF/AE tracking, and low picture distortion for 540 JPEG or 150 RAW shots.

The Canon R3 has the same level of durability and dust and moisture resistance as the flagship EOS-1D X Mark III DSLR camera, which also has the same strong, weather-sealed build.

The EOS R5 also boasts superb weather-sealing that is comparable to that of the Canon EOS 6D Mark II, but not on the same level as the EOS-1D X Mark III and, by extension, the new EOS R3.

The Canon R3 features the same integrated grip with duplicated vertical controls that EOS-1D series customers have been enjoying for years.

While most professional shooters will be pleased, some may find the increased heft and lack of flexibility to be unappealing.

Fitting the optional BG-R10 battery grip to the R5 accomplishes much of the same thing as having an integrated grip, increasing battery life and offering vertical controls while keeping the same level of dust and moisture protection, but with the option of removing it if necessary.

The Canon R5 boasts an outstanding stabilization system. It has 5-axis in-body image stabilization (IBIS) that delivers up to 8-stops of IS when used with certain compatible lenses.

The new R3 features the same IBIS system as the R5; its 5-axis In-Body Image Stabilizer may also be combined with the optical Image Stabilizer in select RF lenses to provide the industry-leading performance of up to 8 stops.

The Canon R5 features a 5.76M-dot OLED electronic viewfinder with 0.76x magnification and a quick refresh rate of 120fps.

Aside from the eye-control AF function, the R3’s viewfinder is identical to the R5’s.

The Canon EOS R5 features the same 3.2-inch LCD panel with 2.1 million dots of resolution that debuted on the EOS R camera.

To help protect the camera, it has a completely articulating screen that can be flipped out to the side, twisted to the front, and folded against the back.

Surprisingly for such a high-end camera, the EOS R3 also includes a versatile vari-angle touch screen, which allows for better shooting angle versatility due to its ability to tilt and rotate into a variety of orientations, as opposed to the fixed screen on the EOS-1D X III DSLR camera.

However, it has a far greater resolution than the R5’s screen – 4.1 million dots to be exact – which is a huge improvement.

The R5 includes an eye-catching 8K video option, making it one of only two digital interchangeable lens cameras with this feature at the moment, along with the Sony A1.

Because of the 24 megapixel sensor it employs, the Canon EOS R3 “only” allows 6K/60p recording, in addition to 4K video at up to 120p.

We also expect that the bigger body and the negative comments received by Canon regarding the R5 would prevent the new R3 from overheating in the same way that the R5 did.

And that certainly appears to be the case, as Canon claims that the R3 can record up to six hours of standard footage or 1.5 hours at high 119.88/100p frame rates – excellent news given the R5’s poor reception.

Both the EOS R5 and the 1D X III feature twin memory card slots, as one would expect from a professional camera, but the R5 has one slot for high-speed UHS-II type SD cards and the other for ultrafast CFexpress cards, whilst the 1D X has two CFexpress slots.

The Canon R3 includes one UHS-II SD card slot and one ultra-high-speed CFexpress slot, following in the footsteps of the R5, rather than the EOS-1D X Mark III’s two CFexpress slots.

Life of the Battery

The LP-E19 battery used by the EOS-1D X III is CIPA rated to 2850 shots with the optical viewfinder and 610 shots with Live View.

Canon is also introducing a new Mobile File Transfer smartphone app to transfer photographs and speed up workflow while on the move using mobile network connections rather than wired LAN equipment. It will initially be available solely for Apple devices in June, with Android support coming later.

What we currently know about the Canon EOS R3 places it well above the R5 in the company’s full-frame mirrorless camera series.