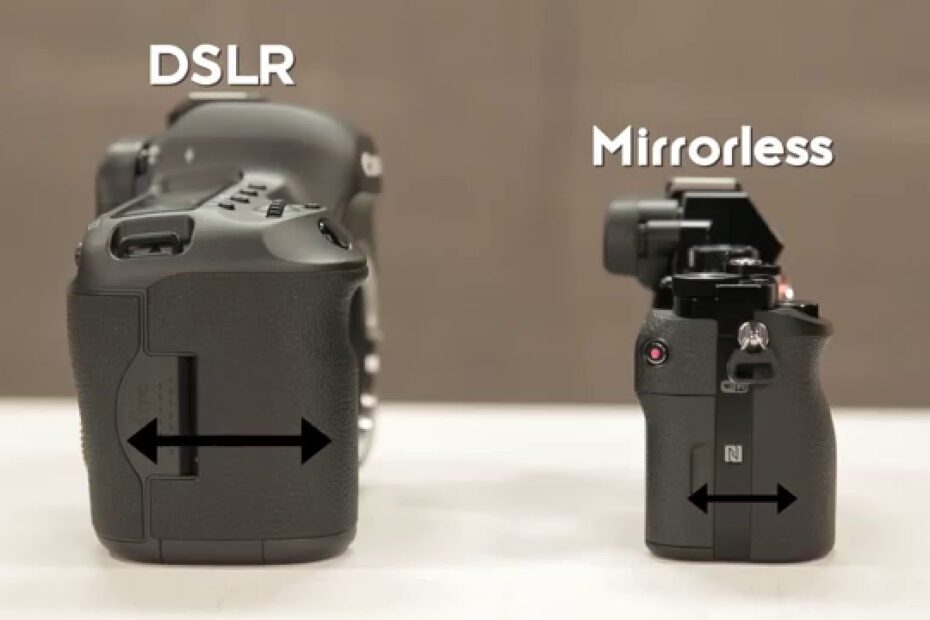 DSLR vs Mirrorless: Which Camera is Better for You?

I’ll break it all down for you in this essay. I’ll discuss the advantages and disadvantages of DSLRs versus mirrorless cameras, as well as provide lots of practical examples so you can compare how mirrorless and DSLR cameras perform while shooting landscapes, sports, portraits, and other subjects. By the end, you’ll know which camera type is best for you.

What’s the difference between Mirrorless Cameras and DSLRs?

Mirrorless cameras and DSLRs appear to be very similar on the surface, but when you open them up, you’ll notice some significant differences. In this section, I’ll introduce you to the fundamentals of mirrorless and DSLR technologies.

What exactly is a DSLR camera?

DSLRs, or digital single-lens reflex cameras, all have the same basic design:

Light comes via the lens, bounces off a mirror, passes through a specific prism, and enters your eye through the viewfinder.

The mirror then flips up to expose the camera sensor to light when you click the shutter button. The viewfinder immediately blackens (no mirror, no light, right? ), the shutter slides out of the way of the sensor, and – presto! – your shot is captured.

DSLR cameras now operate smoothly, however, they have a basic flaw:

Mirrors occupy a lot of room. If you’ve ever touched a DSLR, you’ve surely noticed its considerable size and weight; this is due to the unique DSLR components, which necessitate a big, hefty housing. This isn’t an issue for some photographers, but for others – those who shoot all day, travel regularly, carry a camera around all day, or simply want a tiny, lightweight package – DSLRs are simply too huge and unwieldy.

And here is where mirrorless cameras come into play.

What exactly is a Mirrorless Camera?

Mirrorless cameras are similar to DSLRs, however, there is one major difference:

They don’t come with a mirror. Light enters the lens and never bounces off a mirror to illuminate a viewfinder; instead, the light is sent directly to the sensor. After that, the sensor is digitally projected onto the camera’s back LCD and (in certain cases) through an electronic viewfinder.

When you press the shutter button on a mirrorless camera, the sensor simply begins to capture data, and you receive a photograph. (A mechanical shutter is frequently used, although that is outside the scope of this article.)

Mirrorless cameras are often significantly smaller than DSLR counterparts due to the lack of a mirror, especially when compared to cameras of identical sensor size – yet the elimination of mirror technology has resulted in a variety of extra benefits and downsides, as I detail below.

It’s also worth noting that there are many distinct types of mirrorless cameras on the market. Some feature interchangeable lenses, while others just have one built-in lens. In reality, if you buy a smartphone, you already have a mirrorless camera (imagine attempting to squeeze a mirror mechanism inside one of those small lens holes!).

Despite using a smaller Micro Four Thirds sensor, the Panasonic Lumix GH4 captures images on par with most APS-C sensors and even shoots 4K video. (Panasonic provided the image.)

The advantages of Mirrorless Cameras

Now that you’re aware of the fundamental distinctions between mirrorless and DSLR cameras, let’s take a deeper look at the benefits of mirrorless technology, beginning with:

Mirrorless cameras are more compact and lightweight than DSLRs.

I started it before, but it’s so important that it bears repeating:

If you want to take your camera with you everywhere you go, a mirrorless camera will make your life much easier. They’re also rather light, so you can shoot all day without getting tired (provided your lens is on the tiny side!).

Mirrorless cameras include electronic viewfinders and LCDs with a lot of features.

See also  DIY Guide On How to Photograph Jewelry

Benefits vary depending on the camera, but may include:

If you’ve ever fired a DSLR, you’ll know how loud it is, which may be an issue when attempting to photograph covertly (during a wedding, for instance, or when capturing candid shots on the street).

Some DSLRs do have quiet-shooting settings, but they aren’t truly silent in my experience. Sure, they’re quieter than the normal clunk of a DSLR shot, but the noise from a silent-shooting DSLR will still be detectable in a calm environment.

DSLRs were undeniably quicker (and better) at focusing until recently – but with recent advances in core AF technology, as well as many features made feasible by on-sensor mirrorless AF, today’s finest mirrorless cameras are, on average, faster and more accurate focusers than DSLRs.

Not all mirrorless cameras have these class-leading AF characteristics, and certain DSLRs may still outperform many mirrorless cameras when it comes to capturing sports and other dynamic scenarios. However, mirrorless autofocus technology has begun to overtake DSLRs (plus, manufacturers are adding new updates all the time).

The advantages of DSLR cameras

DSLR vs. mirrorless camera Canon EOS 7D Mark II DSLRs may be based on outdated technology, but don’t dismiss them just yet. Many photographers like them, and they still offer certain advantages over mirrorless cameras.

Although mirrorless cameras are excellent, there are several reasons to continue with a dependable DSLR. Here are some crucial points to consider:

Now, the statistics above are based on CIPA ratings, which do not reflect actual usage. A regular mirrorless user can record more than 400 images on a single battery – but you’ll still need to bring a few additional batteries with you for day-long sessions and while traveling, which may be cumbersome (and rather pricey, too).

On the other hand, you can expect your DSLR to operate well on one or two batteries, so if you like to work without the need for a large number of extras, a DSLR may be the better choice.

Which should you buy, a DSLR or a Mirrorless Camera?

The reality concerning DSLRs and mirrorless cameras is as follows:

Neither one is intrinsically superior to the other.

Mirrorless cameras, on the other hand, provide numerous major benefits, such as live exposure simulation, a smaller size, and quiet shooting – while DSLRs offer a few advantages of their own, such as long battery life and optical viewfinders.

So, which one should you get? It all depends on your shooting requirements. If you want to travel with your camera, enjoy silent shooting, and value the notion of a useful exposure preview, I’d recommend investing in a mirrorless camera.

However, if you like the sharpness of an optical viewfinder or despise the concept of limited battery life, a DSLR is the way to go.