The Sony FDR-AX53 is the third Sony 4K camcorder ever released and the second one being featured in Sony’s “casual shooting” category. Like the other camcorders in the AX series (which technically means 4K), there is no built-in projector feature and the overall body is larger than any of the camcorders in the CX series. It still has a smaller sensor than the aging but highly powerful 1080p Sony HDR-CX900 and still manages to be priced $300 cheaper. But because the Sony FDR-AX53 camcorder isn’t directly replacing the older model right away, most potential buyers will have to decide between going this new model or racking up some big savings by getting the now discounted Sony FDR-AX33.

The compact size of the Sony FDR-AX53 4K camcorder still means that this camcorder isn’t fully recommended for serious commercial videography but this prosumer model still has plenty of advanced shooting features with a multi-purpose ring to adjust the zoom, focus, IRIS, shutter speed, and exposure. There is a dedicated manual button that lets you pick the mode assigned to the manual ring and the electronic viewfinder does a splendid job showing a live preview. 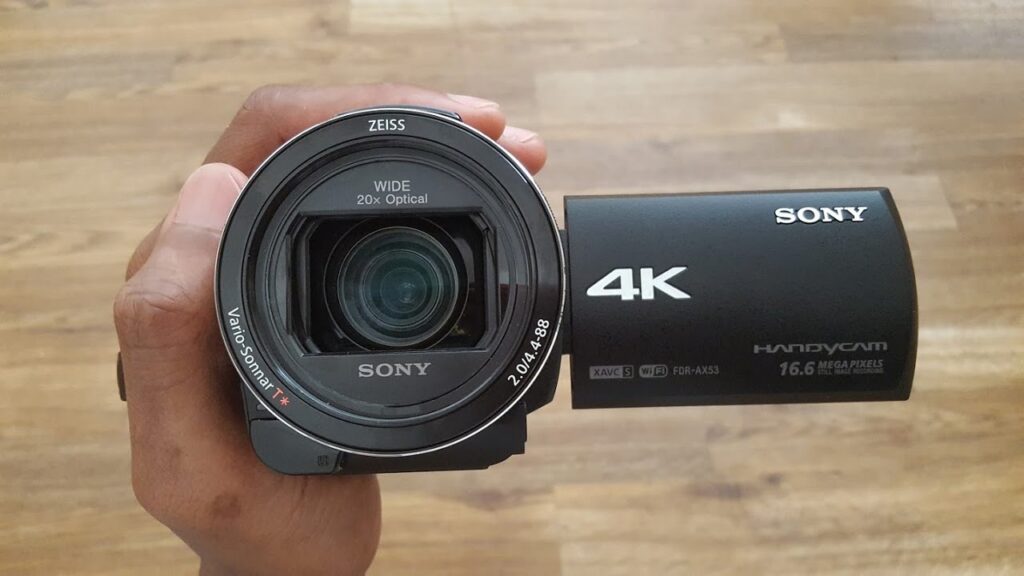 Wi-Fi and NFC are also built-in to the Sony FDR-AX53 camcorder so you can allow a smartphone or tablet to function as a viewfinder too through the freely available PlayMemories Mobile app. NFC has the added benefit of allowing most new high-end Android phones to pair with the camcorder through a simple tap. There is also an optional feature called Multi Camera Control which you can use if you have other Sony Handycam devices that support the feature. This enables you to record various angles of a scene and letting the software synchronize the controls to make it easy to operate all Wi-Fi connected cameras at once. Live streaming to USTREAM is supported too.

Although 4K is a huge selling point for the Sony FDR-AX53 4K camcorder, it is still possible to use the 4K capabilities to make far better Full HD feature through a process called super-sampling. This is basically a downconversion technique which records video in 4K and then downsizes it to Full HD. The end result is better video quality than native HD. Regardless of the shooting mode, video quality looks noticeably better on the FDR-AX53 camcorder, especially when recording dimly lit scenes.