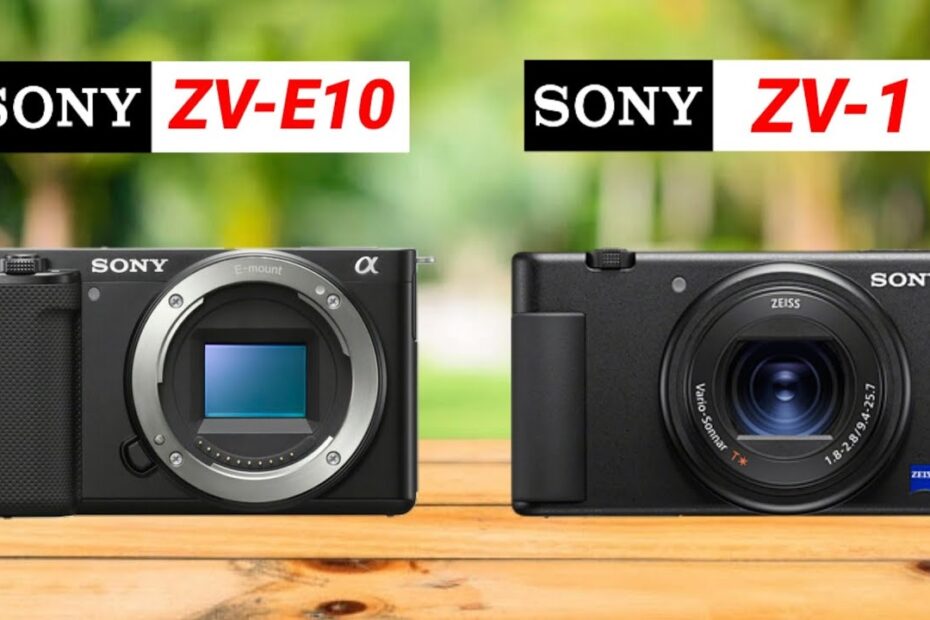 Since its release in 2020, Sony’s ZV-1 has proven to be a successful tiny camera, with a plethora of capabilities tailored exclusively for vlogging and content creation. In 2021, the ZV-E10 mirrorless model will follow in the footsteps of its younger sibling.

So, what makes the new ZV-E10 different from the ZV-1, and which of these cameras is best for you?

We’ve put up this detailed Sony ZV-E10 versus Sony ZV-1 head-to-head comparison to help you decide between the two.

You may also read our in-depth Sony ZV-E10 and Sony ZV-1 reviews to find out what we think of each.

The ZV-E10 has 24.2 megapixels and the ZV-1 has 20.1 megapixels, hence the former has a slightly higher resolution.

More importantly, the ZV-E10 uses the same APS-C sensor as the rest of the A6xxx series, although the ZV-1 has a physically smaller 1-inch sensor.

Because of its higher pixel size, the ZVE10 is a better camera in low-light circumstances than the ZV1. It also has a wider dynamic range than the ZV1.

It’s also easier to create shots with a narrower depth of field and more blurred backgrounds when using the ZV-E10, albeit this is heavily dependent on the maximum aperture of the lens with which it’s paired.

The ZV-1’s stacked Exmor RS sensor gives it several advantages over the ZV-E10, notably in burst shooting and slow-motion video capability (more on those below).

Both cameras employ the same fast Bionz X image processor, which gives the ZV-E10 a claimed focusing speed of 0.02 seconds and enables the ZV-1 to shoot at a rate of 24 photos per second utilizing the electronic shutter!

The Alpha ZV-E10 features a hybrid auto-focus system with 425 phase-detection and 425 contrast-detection AF points that cover 84% of the image frame.

The ZV1 also contains a Hybrid AF sensor, although it has 315 fewer phase-detection points and 425 contrast-detection AF points.

Both cameras feature Sony’s excellent real-time tracking system, which includes Eye AF for humans/animals in stills and humans in the video, as well as the Face Priority autoexposure (AE) function, which detects and prioritizes the subject’s face and adjusts the exposure to ensure the face is depicted at the optimal brightness.

Video can be recorded in 4K resolution at up to 30fps on both the Sony ZV-E10 and the ZV-1, while Full HD can be shot at up to 100/120fps depending on whether the format is PAL or NTSC.

Both models include Sony’s S-Log2 and S-Log3 gamma and HLG curves, which allow for better dynamic range recording. Sony’s Picture Profiles are also present and correct, allowing you to compare footage shot with the ZV-E10 or ZV-1 with footage shot with higher-end cameras like the A7 III.

The ZV1’s stacked sensor also allows it to offer special HFR settings where you can record brief video clips at 250, 500, or 1000fps, with material subsequently preserved at 25fps for super slow-motion playback – the ZV-E10 does not have this capability.

Both cameras include Sony’s vlogger-friendly features like Background Defocus, Product Showcase, and a Tally light.

There is a Background Defocus button on both. The purpose of this button for vloggers is to toggle between blurred and clear backgrounds. It is toggling the aperture between the greatest available for the attached lens and a stopped-down value in photography terminology.

The Product Showcase mode is an autofocus mode that notifies the camera to shift the focus away from a person’s face and toward an object held up in front of the camera. It’s a popular YouTube approach for showing a product to the viewer, however with cameras with slower autofocus, it can leave the focus set on the presenter’s face while leaving the product out of focus, and vice versa. The Product Showcase option addresses this issue, providing another advantage for vlogging with these cameras.

A recording bulb (tally light) is also provided on the front face of the camera body providing an instant indicator of the current video recording status, as is a red colour recording alert square on the LCD screen (both can be turned off).

Both cameras can broadcast live video directly to a computer or compatible mobile device via USB, eliminating the need for a video capture card. This enables the video and audio capabilities of the camera to be used for live social networking and video conferencing. For greater picture and sound quality, while streaming, both the UVC and UAC standards are supported.

This is one of the primary distinctions between the ZV-E10 and the ZV-1: the former has an integrated ND filter, whilst the latter does.

What is the significance of this? This 2-stop ND filter on the ZV-1 allows you to shoot at bigger apertures on bright days, which is especially handy when shooting video and trying to adhere to the shutter speed being twice the frame rate guideline. To achieve the same results with the ZV-E10, you’ll need to utilize actual glass filters installed on the lens.

The ZVE10 and ZV1 both have a directed 3-capsule microphone for 3-channel sound. It also has a wind-reducing design, with a detachable Dead Cat windscreen included in the box. Clear sound isolation is ideal for capturing your speech rather than the backdrop, and there’s also a dedicated Multi-Interface Shoe for an additional microphone and other extras.

Both cameras include a 3.5mm microphone input, however, only the ZV-E10 has a headphone output.

With the mechanical shutter, the ZV-E10 can shoot at 11fps with continuous AF/AE tracking and 8fps with the silent electronic shutter.

The Sony ZV-1 boasts a substantially quicker maximum burst rate of 24fps with continuous AF/AE tracking because to its stacked sensor.

The ZV-E10 is a mirrorless camera with detachable, interchangeable lenses. It’s frequently sold in conjunction with the compact, lightweight E PZ 16-50mm F3.5-5.6 OSS lens, which is a nice place to start if you don’t already own any E-mount lenses.

The ZVE10 even includes a built-in zoom lever that surrounds the shutter button. Although it only works with Sony’s Power Zoom lenses, it’s a useful function to have on such a video-centric camera, since it provides an alternative to utilizing the zoom ring on the lens itself.

So the ZV1 offers a versatile 24-70mm zoom range out of the box in a small, lightweight package that fits in your pocket, whereas the ZV-E10 offers significantly more versatility by accepting a wide range of different E-mount lenses, but is consequently larger, heavier, and potentially (much) more expensive.

Neither the ZVE10 nor the ZV1 has any kind of weather-sealing certification.

Optical Steadyshot is incorporated into the lens of the ZV-1 for image stabilization. This will give you a few stops more to work with when taking still shots and will smooth out even the smallest motions when recording video.

There is no built-in stabilizer on the ZV-E10. Instead, you’ll need to utilize a lens with its own built-in stabilization technology, such as the E PZ 16-50mm F3.5-5.6 OSS, which comes as part of the camera body package.

Both cameras allow you to enable Active SteadyShot in video mode, which is a digital kind of stabilization. This gently reduces the image to allow the camera to digitally move the image frame around to adjust for any greater movements.

It works really well, producing excellent stable footage when handholding and removing all but the strongest of walking footprints. The drawback is that, because of the minor crop, your face will appear larger when in the frame if you are vlogging.

We recommend utilizing it just when strolling or zooming in to show something, and sticking to the Standard Steadyshot mode when presenting to the camera.

Because neither camera includes a viewfinder, you’ll have to seek elsewhere if you don’t like using an LCD screen for composition.

This means it can be flipped out to the side and rotated forwards by 180 degrees for vlogging or self-portraits (or selfies as they are now known), as well as folding the screen into the camera body for safety when carrying the camera lose in a bag or pocket.

Both the ZV-1 and ZV-E10 include a single memory card slot that accepts UHS-I SD cards.

Life of the Battery

The Sony ZV-E10 and ZV-1 are both excellent vlogging options at roughly the same price point, but their approaches clearly differ – the former is larger but has a larger sensor and a potentially more versatile interchangeable lens system, whereas the latter is more compact but has a smaller sensor and a less versatile fixed lens.