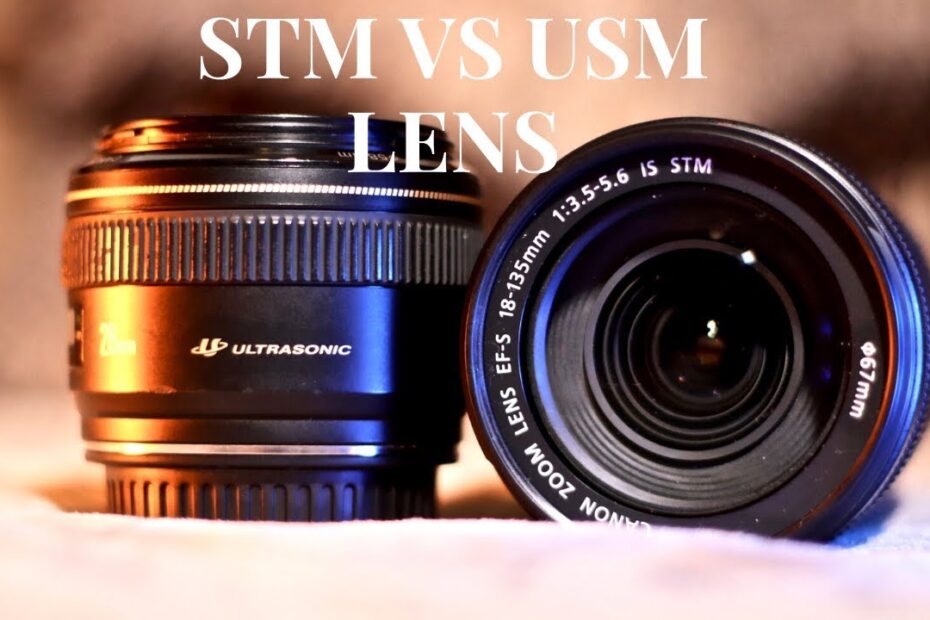 First, some historical context is necessary. That which we are about to discuss is without a doubt going to be a really exciting technological advancement. Yes, we are all aware that cameras are meant to be equipped with a focusing motor; however, few of us are aware that a focusing motor may also be placed inside lenses; Canon was the first company to accomplish this feat. Canon was the first firm in the world of photography to have the courage to implement such an invention, and now all other companies are only following in Canon’s footsteps because it is now common practice for a focusing motor to be housed inside of a camera lens.

The process of selecting the appropriate lens for your camera is not an easy one in most cases. This is especially true if you are an experienced photographer who is aware of your specific needs and goals. When you have to select between two lenses that were created by the same business and you have a sneaking suspicion that they both have the potential to be excellent, the process becomes even more difficult. In any case, allow me to simplify the decision-making process for you by elucidating the primary distinctions that exist between STM and USM lenses. Let’s get into it!

Which one is better?

What they stand for – To begin, it is imperative that we are aware that each of them is an autofocus lens; nonetheless, the catch is that they are constructed using distinctively dissimilar autofocus systems. The letters STM do not stand for anything else; rather, they stand for “Stepper Motor,” which is the mechanism that enables autofocus in Canon STM lenses.

When it comes to the functionality of these lenses, the focus ring is rotated by a geared motor during the operation of these lenses. On the other hand, USM is an abbreviation that stands for ultrasonic motor or autofocusing. Ultrasonic vibrations are necessary for the operation of USM. In order to rotate the focus ring, these vibrations are converted into a series of repetitive movements.

Silent or noisy – This is a very significant distinction to make because you have to carry your camera around with you wherever you go. If you are the type of person who is easily irritated, then you probably shouldn’t get the USM lenses because of the noise they produce. This noise is mostly brought on by the rapid movement of the elements that make up the lens. Therefore, you would not be doing yourself a favor by acquiring the USM lens if you are seeking for a lens to take, in particular, videos with.

STM lenses, on the other hand, are as quiet as a church mouse. As a result, we are able to conclude that, when comparing these two lenses, the STM lens is superior in terms of its ability to record videos.

You will decide what lens to purchase based mostly on this characteristic, and this is true regardless of whether you are more of a photographer or a videographer. Because it produces less noise, STM is ideal for use in videos. Forget about using USM lenses and choose instead for an STM lens if you don’t want the video you record to have an odd noise in the background, which would be the noise produced by the lens itself.

On the other hand, if you are more of a photographer and you happen to have some extra cash on hand, then don’t think twice about purchasing a USM lens; you can thank me for the recommendation in the future.

Prize money – If you are stating that I will purchase the greatest lens available regardless of the cost, then you can ignore the rest of this section. But if you are claiming that you are working under a certain financial constraint and that you need to conduct some calculations, then listen to what I have to say.

There are a few factors that contribute to the difference in price between SM lenses and STM lenses.

To begin, as we have already indicated, USM is equipped with an ultrasonic motor for autofocus, which, as one might expect, can be somewhat pricey.

Second, because USM lenses are equipped with an ultrasonic motor, they are considerably quicker than STM lenses.

You can manually focus USM lenses without having to switch from the autofocus mode to the manual focus mode, which is probably not the least important feature of these lenses. It is true that it is pricey, but if you buy a USM lens, you are also obtaining these three incredible major qualities.

Furious or not – It’s important to remember that USM lenses are significantly quicker than STM lenses. Therefore, if you are looking for a lens that has a quick autofocus, the USM lens is the best option for you. The ability of this lens to quickly focus on multiple subjects at once makes it the go-to choice for the vast majority of wildlife photographers.

Following our discussion of the primary distinctions that exist between these two types of lenses, we will now on to examine the various USM and STM lenses that are available.

When compared to a rotating movement of the lens, the Nano USM gives a more linear movement. It is necessary to use focus-by-wire with this lens because, much like with STM lenses, the manual focus ring is not connected to the lens focus system. This is one of the characteristics that this lens shares in common with STM lenses.

This particular variety of USM lens is driven by a sonic vibration motor that must always be physically connected to the focusing mechanism in order to function properly. The Micro USM type, just like the Nano type, does not feature a manual focusing mode that is active all the time.

This specific type of STM lens is distinguished by two primary characteristics. They are incredibly swift and super silent.

This iteration of the STM lens is smaller than the one that came before it. It is actually meant to be as little as possible, which enables it to function effectively in much more diminutive lenses.

When it comes to these two incredible lenses that were developed by Canon, there is no right or wrong answer, nor is there a proper or right answer. In this instance, there is no right or wrong answer. The choice between the two options is not an easy one to make, but at least you now know what to take into consideration and what not to take into consideration, and you are confident that there is no possibility that you will pick the incorrect option while making your selection. When it comes to picking amongst so many wonderful lenses, I would recommend concentrating on the purpose for which you would be using them. That is the very first thing that needs to be done. Where exactly will those lenses be used, and for what purpose? This could be one of the questions you consult as a reference whenever you are unsure which option to pursue and which one to abandon. You are the only one who can make the decision, but you shouldn’t be concerned about making a mistake because there is no room for one.